Spring is in the air and our garden is alive with activity, especially after the good rains we’ve had. Nesting in one of the ancient syringa trees is a woodpecker family. The photos show a parent keeping vigil. Today we saw a fluffy, baby, grey head pop out of the hole. Sweetness! If we are allowed closer, photos of the baby will follow. The Olive Woodpecker has two isolated subspecies in Africa – one is in Central Africa, and the other is endemic to South Africa, living in evergreen forests. It forages in the upper canopies of trees, probing pecking branches and licking with its barbed tongue. Both sexes excavate the nest, which is usually a oval-shaped hole in the trunk of a tree. Egg-laying season is from August-November, peaking from September-October.It lays 2-3 eggs, which are incubated by both sexes for roughly 15-16 days. The chicks are cared for by both parents, leaving the nest at about 24-26 days old. The juveniles return to the nest to roost for about 3 months, after which they become fully independent. Several adaptations combine to protect the woodpecker’s brain from the substantial pounding that the pecking behaviour causes: it has a relatively thick skull with relatively spongy bone to cushion the brain; there is very little cerebrospinal fluid in its small subarachnoid space; the bird contracts mandibular muscles just before impact, thus transmitting the impact past the brain and allowing its whole body to help absorb the shock; its relatively small brain is less prone to concussion than other animals. Source: Wikipedia 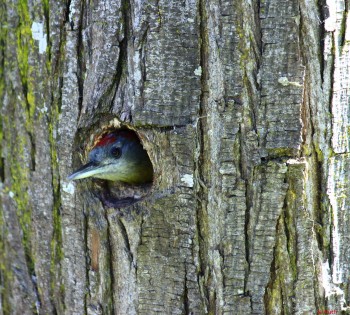 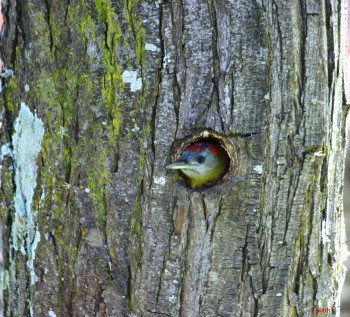 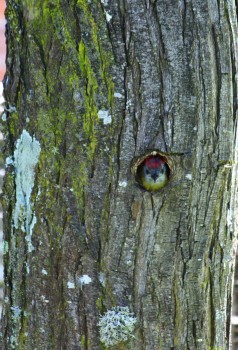